Here's a handful of stuff that caught my ear this year. Look forward to a list of full lengths (I'm taking my time to backtrack as well as explore anything I might have missed). Share your thoughts, and please point out what I might've missed ( I always need new music). I've listed my 9 favorite not-full lengths of the year because 9 is the most metal number besides 11. Everything's gone topsy turvy since I found out Teitanblood has an ep that's just come out and near impossible to get a hold of. This list reflects that. 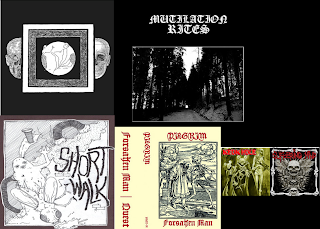 9.Suffering Mind/Neon Hole- Split
Our favorite Polish grinders offer up nearly 4 minutes of the most consistent grind around. Neon Hole's not breaking new crust, but the death metaly grind chaos of their side is just enough to keep up with Suffering Kielbasa.
8.Pilgrim - Forsaken Man
Old is new again, as Pilgrim fly under the radar of bands trying to recapture earlier magic of stale genres. Forsaken Man is a well executed and riff barrel of doomy goodness.
7.Short Walk -  Don't Be One
A reminder to the scene that power violence started from punk music, Short Walk are off the wall with this light-hearted thrashfest of a release.
6.Mutilation Rites - Demo (2011)
Thrashy chops, memorable compositions and great production show this NYC group's ready for the big leagues. Look for them at the forefront of the usbm scene soon.
5.Ash Borer/Fell Voices - Split 12"
What else is there to say besides there are two of the best black metal bands around? Long, winding, and organic spindles of thread and sewn between the two of these West Coast deities.

Vastum's demo/debut showcases a picture perfect reflection of early death metal channeled into one entity. Riffs reminiscent of Dismember, rhythm and attack familiar to Cianide, and an overall gloom that brings to mind Incantation. Far more than worship, Vastum's ritual form of blasphemy belongs at the top of what passes for death metal these days.

Protestant's proper check in to 2011 has been yet another solid slab of metallic hardcore that's way more fulfilling than you'd expect an EP to be. Dynamic takes like the opener "Nothing Left" have as much to mosh to as there is to pump your fist and sing along to. A mature and well rounded release from a band that's melded the angst and violence of hardcore with the melodies and intricacies of metal.

Ruin Lust's Cyclopean sound burns not only in it's visceral songwriting, but also in the pure animosity within each member's respective instrument. Not since Teitanblood's Seven Chalices has a band sounded so powerfully dark and violent with drums like turbulent storms and vocals that coincide with animalistic slaughter. A step above your average Blasphemy worship, Ruin Lust's laconic demo drowns out the light and thunders in the darkness. My favorite non full length of the year belongs enigmatic U.K. electronic artist Burial and his rendition of two Massive Attack tracks. This is somewhat new ground for me, so I can't comment about previous efforts, but Burial's treatment of the two tracks is otherworldly and mesmerizing. The slow, hypnotic beat finds it's way through both tracks as a lone familiar singer sings admist the serene passages of varying noises and glimmers. Simply beautiful and darkly touching, this is one of my favorite releases this year period. I don't even know if this is out here in the States, if I'll even be able to buy it, or whatever; but I'm going to do something completely illogical and say this is the best of the year even though I have only this to go on...

"'Purging Tongues' is the revelation of blood-stained truth from behind the wall of life. Death Metal told in blind voices, guided by mute vision from the bottomless pit."
at 1:22 PM

so wait, is that like the time roger ebert reviewed a movie he walked out on? but like in reverse?

It's a gamble here, and I've destroyed any creditability I might have as a reviewer, but I stand by my choice. Teitanblood is beyond everything.