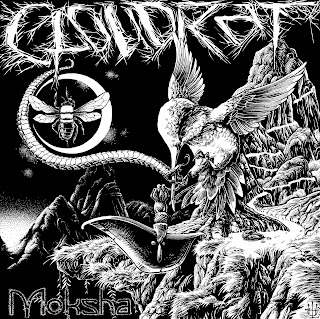 Cloud Rat's second LP, Moksha, is a fierce surge of melodically intertwined grindcore with nods aplenty to various influences. To allocate one particular influence would be futile as Cloud Rat mix everything from His Hero is Gone guitarwork, a tone owing to Sunlight Studios, a breath of shoegaze and even Neil Young with a cover of his "The Needle and the Damage Done." This rich mixture creates a unique buzz of grindcore that's as emotionally charged in its hooks as it is in its deeply personal lyrics and equally vehement performance by their singer Madison.

Opener "Inkblot" lures listeners in with an ethereal intro that's distant and unassuming. This calmness comes again in "Infinity Chasm" which showcases clean group vocals and clips of what sound like school children admist a slow and clean guitar/bass melody that builds up to a shoegazing explosion that really had me taken by surprise in the best way possible. Immediately I wanted to call this "shoegazecore"....but I thought I couldn't be that stupid. But, this is just another strength for the relatively young Michigan three piece; their ability to seamlessly blend influences and styles into an even and well grounded sound that's definitely punk in its heart.

As mentioned earlier, the band chooses to cover Neil Young. This is a bold thing to do for a grindcore band, and I'm going to assume most listeners will like it (because they seem to mix both world well), but it just doesn't do it for me. What does work for me are the fluid mixtures of riffs and sections, brutal and rough, to catchy and hummable, and vocals that will let you join in for a phrase or three. The riffing style, as mentioned earlier, has that momentous charge to it that HHIG skillfully employed yet has a buzzing fervor to it that adds a large dose of aggression.

"Inkblot" is one of those textbook examples of how to open an album, especially with that great refrain that pops up towards the end. "Peer to Peer" follows the same thread and the last song to incorporate vocals, "Vigil," is a punishing and dynamic track with a spoken part and powerful build up that would be a gift to hear live.

An album that I couldn't have anticipated or assumed to sound any which way, Moksha, does in fact feel like a spiritual release; something that few bands in grindcore are even close to doing.