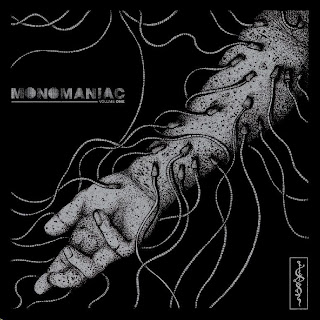 Back in the day, a day I probably don't have much business talking about, procuring music was more difficult and expensive; hence compilations provided a necessary role for those without buckets of money. Growing up I indulged in plenty of shitty compilation cds and would find one or two bands worth a damn and was thankful for that. A bit of nostalgia in that regard as Blastbeat Mailmurder's Monomaniac Vol 1 occupies an excellent niche in the grindcore world as it brings together many bands ready to burst into international acclaim (and all tracks exclusive to this comp).

Keeping with the comp's theme of roughly 1 minute offerings, I'll describe each track with one sentence.

Michigan grinders Cloud Rat start things off with "Finger Print;" a jam those Finns Rotten Sound wish they could pen.

Following up are 3 frantic, noisy and raw outbursts from Australian favorites thedowngoing (review for their latest athousandyearsofdarkness).

"Birthday Party" shows Detroit's strong suit in penning a 34 second grinder that's as elaborate and thick as you could get.

My first introduction to Sete Star Sept isn't pretty, nor is their brand of noiser than thou grind encapsulated by "Why not Intersect."

Head Cleaner offer up the most metal approached grinder of the comp with "The Weapon of the Proletariat," which disappointingly lacks a bit of the muck the other bands include.

Diocletian's "Traitor's Gallow" is a welcomed change of pace as it ushers in one of two awesomely brutal and rough black metal tracks that incorporate an ugly breath of death metal.

The Howling Wind offer a strand of their subterranean and bizarre conjuration of black metal seen through grinder's eyes with "Bewilderment."

"Beneath the Emblems of Death" is the comp's other brutally ugly blacken death metal track courtesy of Sempiternal Dusk.

Things end on an unsettling, abstract, and alluring note revolving around noises and one noodley guitar line with This is Past's contribution "Catatonia."

A great comp showcasing bands from all over the globe that you should hear. I particularly like the combo of black metal bands with grindcore bands as it's always been a marriage I've advocated. I'm particularly fond of Body Hammer and Diocletian's contributions to this comp.

yeah more grind meets black metal would be cool! I back you on that!

ps : you should try some more Sete sept star if you don't know it, really a radical and cool, harsh but funny band!

fuckyoga hooked me up with a promo- review to come shortly. And I think you hit the nail on the head, with noise grind you need to approach it with a strong sense of humor.

i'm still processing the sete star sept discography record, but i scribbled something in my notebook about "the discordance axis/merzbow collaboration being hatefucked by gore beyond necropsy." i'm still letting it wash over me, but i stand by that image.

yeah, no description could be too weid to describe Sete star sept...

I reviewed their new compilation on Fuck yoga the other day and did an interview by mail with their drummer, looks like he's a guy with an interesting and quite radical, too say the least,approach of music, also playing free jazz as well.
here it is :
http://theblastingdays.blogspot.fr/2012/10/sete-star-sept-vinyl-collection-2010.html

Andrew you nailed it with your description of SSS! :)

Btw I wish I'd have Merzbow on a future volume!