Coins As Portraits - Form and Structure. Storm and Fracture. 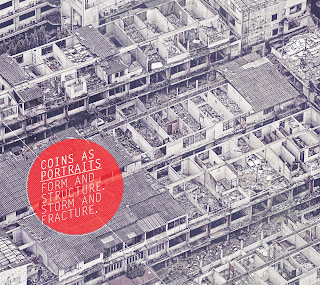 Have you ever rolled your sleeves  and walked into a mess of a room prepared to tackle it, then looked at it a bit too long and completely space out and not do a thing? I ask, because I had a similar feeling upon first listening to Coins As Portraits. But, like the mess in question, when I got into the thick of it, I found all kinds of things I had forgotten about, lost, or simply never appreciated. The uneasy, disjointed jazzy grind that Coins As Portraits plays reminds me a bit of those tech hardcore bands that were all the rage in the early 2000's, bands like Ion Dissonance and the like, but without the necessary bro-ness and floor punching sections (thankfully).

Instead, with CAP (props for a cool acronym) you get highly playful grindcore that I can only compare to !T.O.O.H.! a band I had largely admired but nearly forgotten about. All of that said, the band's songwriting and technical chops is as much the flag they carry and the sword they fall on. My attention starts to wander after a couple songs as each song is next to impossible to discern one from the other. And while this is true,  tracks like "The Human Predicament: Part II" and "Solipsism" standout with oddball moments of melody  that sounds  tragically simple amongst the sea of start-stop riffs and blast beats and encircling vocals that give little, if any, room to breathe.


Check out the last track "Solipsism."

CAP definitely have something going here and  from a musicianship perspective it's quite impressive ( the swing section during "Solipsism" is damn cool). There is a seamless blend of varied musical schools of thought and disciplines underneath the umbrella of blast beats and frantic screams. Much in the way Swarrrm, and aforementioned !T.O.O.H.! and other have played with the confines of a genre that was birthed with 30 second songs, Coins As Portraits play challenging grindcore that is nothing short of intimidating. The band could benefit from a little more moments of normalcy and melody, (using the expected in the unexpected has worked wonders before) but benefits from a just polished enough production and enough variance and discernability to keep you listening  through the 15 minute window of Pollock meets Monk.

I also can't ignore the wittiness the band employs as both their name, and the title of this ep, Form and Structure. Storm and Fracture., is not only a fun play on words, but extremely fitting for their style of erratically familial music that plays extensively with form and mood.

Check it out from Fading Halo Records or Asiluum
at 12:50 PM

Email ThisBlogThis!Share to TwitterShare to FacebookShare to Pinterest
Labels: Coins As Portriats, Form and Structure. Storm and Fracture.

Now I miss PsyOpus. Thanks.

hahaha. i never liked that crap, but i do like this band.